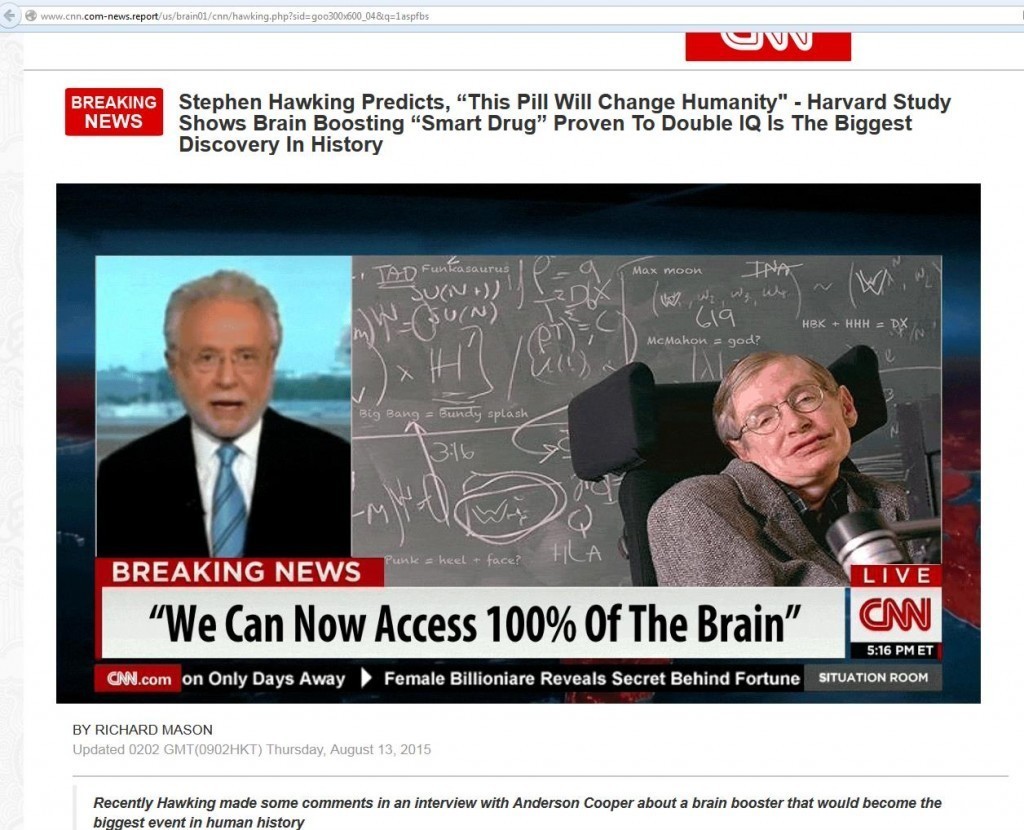 While the quest to remain FTC compliant in native advertising is the best option, there is a lot of gray area and shenanigans going on out there.

Native advertising is meant to be veiled promotion, but an advertisement for a brain boosting supplement takes it to a new level of deception…

Advertising creeps. It slips into everyday things, then acts like it’s always been there.

The ad is for a brain boosting supplement called Cogniq. I first clicked on a “sponsored” link where no-less than Stephen Hawking stated this pill would change humanity. It took me to this page:

(Note, we cannot link directly to the page.  It redirects).

As you can see, this page actually disguises itself as part of the CNN domain. It is not. It’s an advertising landing page.

The page proceeds – in complete editorial format – to explain how Hawking, Denzel Washington, Anderson Cooper, and Bill Gates all use this supplement to great success.

I admit, this ad is so well disguised it took a moment for me to realize it was fake – and I work in the advertising industry.

Of course when you think about, you realize that if Stephen Hawking was actually taking a smart pill, it would be huge news. It’s ludicrous. But when you see Wolf Blitzer in interview mode and famous people being quoted, it doesn’t occur to you that it’s a sales pitch.

Which is what they want. Links click to their sales page:

These guys are pros. This landing page has all the ingredients: urgency, call-to-action, trust labels, testimonials, facts/data, emotional pull, fear factor. All to support a promise that’s too good to be true.

In this case, it’s clear that the advertiser’s intent is to completely disguise the nature of this content. Eventually this may be regulated, but it’s hard to say when because the news agencies also make money off the ads.

In the Oliver piece, a Time Warner executive states that “Good native advertising is not meant to be trickery, it’s publishers sharing their storytelling tools with marketers.”

In the case of Cogniq, the advertiser stole those tools. Buyer beware.